The first time I ever laid my eyes on this wonderful burger joint was in New York when I met up with my friend Rachel in the city. She lives in Australia and just happened to be visiting at the same time as me and we decided to grab a bite to eat. Rachel suggested going to have the “best burger in the city”  and apparently that was at Five Guys.

When I first entered the place the floor was covered in monkey nut shells which I was thought was strange.  Turns out this is the norm! They have crates of monkey nuts just sitting randomly around the restaurant and you can just help yourself to them and throw the shells on the floor which they then clear up throughout the day – seems a little strange but also quite quirky at the same time. The food did not disappoint – I just hoped Belfast would live up to this! 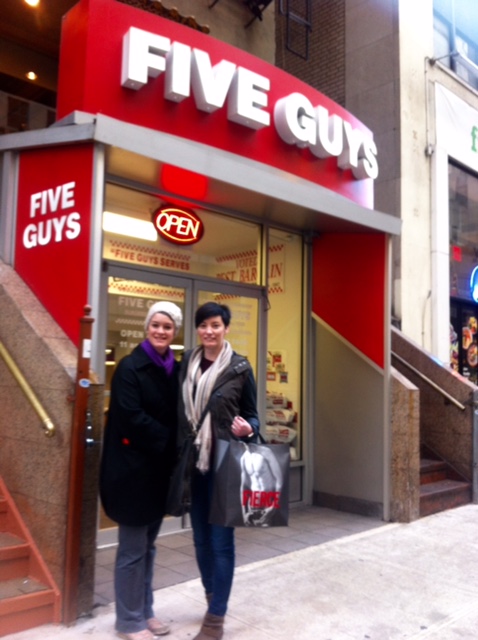 At Christmas we were given a voucher for Victoria Square Shopping Centre. My plan had been to use it in House of Fraser for something boring like tea towels when Chris suggested to keep it for dinner some night in one of the restaurants.  You can imagine my delight once I realised Five Guys had opened in the centre and I pushed this idea hard! I had read many reviews which all said the same thing…it was AMAZING but overpriced for a burger. We let the hype die down before we attempted to visit it and so Tuesday night was the night. 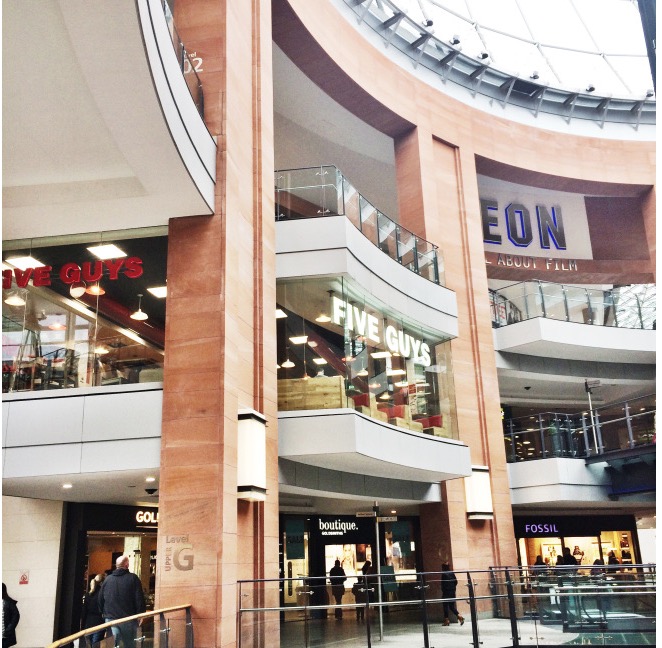 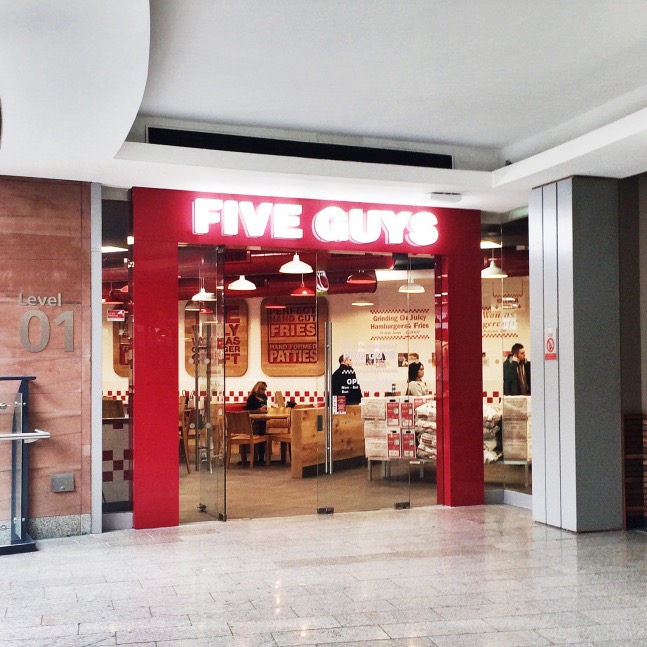 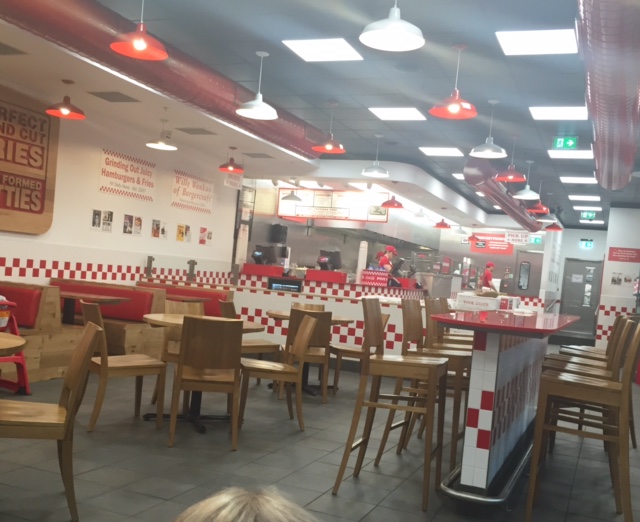 When we arrived it was fairly empty for 5pm. This made ordering for us a lot easier as we had Olivia with us so no queues to wait in..Bonus. Chris ordered at the cash desk and we waited for a matter of minutes before they called out our order number…long enough to be able to read one Winnie the Pooh book (in parent time.) 🙂

The Menu was quite varied and the burgers came in two formats – Little burger and the regular big one. The difference being with the  big one you get 2 meat burgers instead of just one. The fries also came in different sizes and the guy at the cash desk was able to advise us that a regular size would certainly do myself, Chris and Olivia so we took his advice and boy was he right. We had chips left over!

After a quick look at the menu I knew exactly what I wanted…the Cheeseburger! As soon as I seen it on the menu I remembered getting it before and it was delicious. Chris ordered the Hamburger with mayo, lettuce, pickle, ketchup, mustard and bacon…all topping are included in the price. 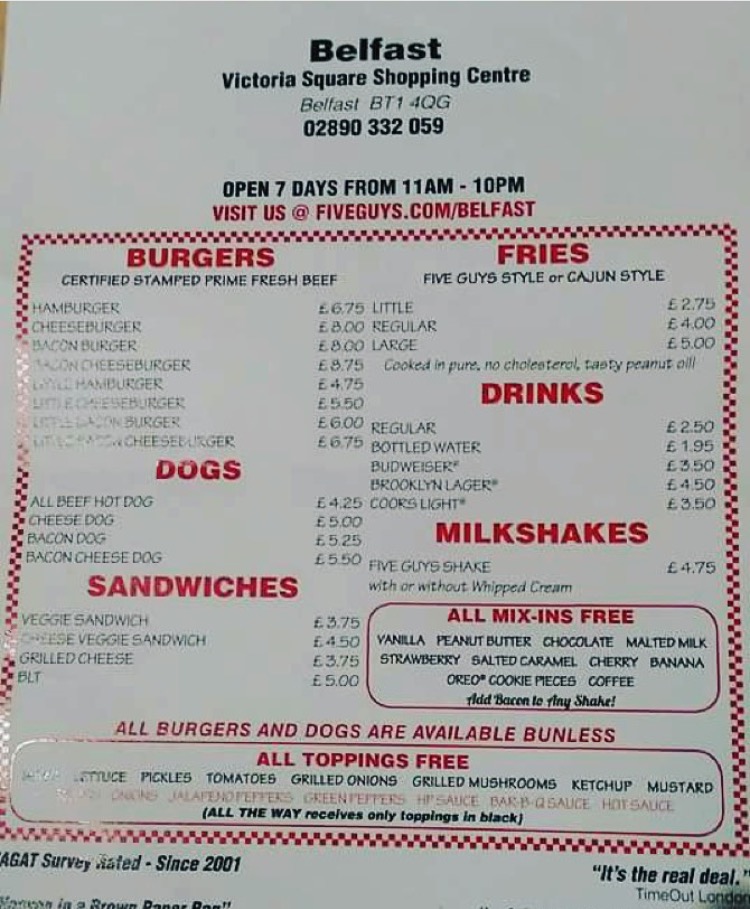 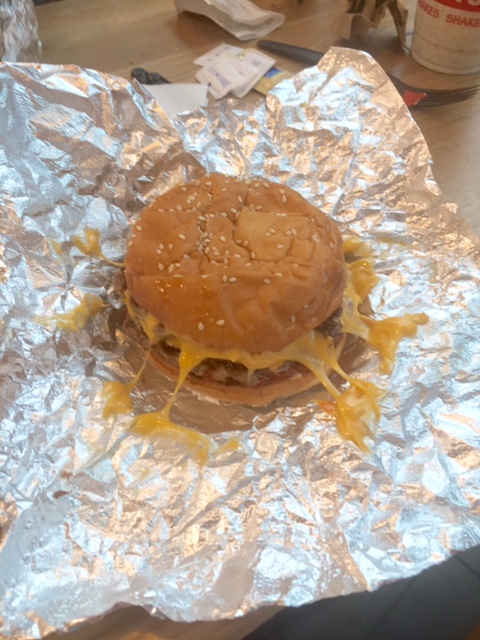 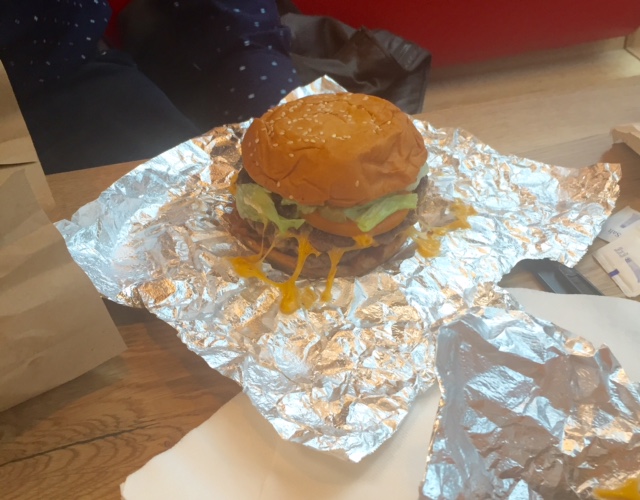 We were able to get olivia a little burger and share some fried with her from our regular (giant) size portion.

The dreamy milkshakes. When it comes to milkshakes I am happy to admit I am a snob. A  milkshake can’t be from a packet or made with powder it has to be with real ice cream and really thick. The best milkshake I have ever had is the caramel milkshake from the Shake Shack which I have mentioned in a previous post. Five Guys however could nearly rival this one 🙂 I ordered a salted caramel and Oreo cookie milkshake and Chris ordered a peanut butter, chocolate and Oreo cookie milkshake both with whipped cream…yum yum! 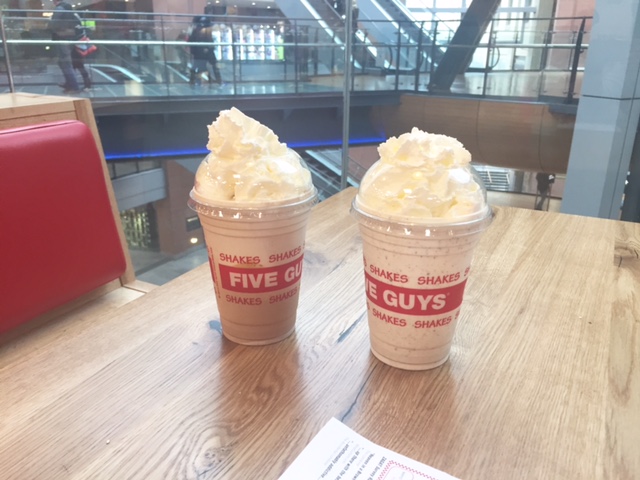 Overall our order came to £35.00. We thought this was pretty expensive. However knowing what we know now about the portion sizes we both agreed a Little burger would be size enough as would regular fries between us both, the potions are big. I wouldn’t be deterred from the cost of the milkshake though because a good one is hard to find and this was worth it. After discussing would we come back again after getting the bill we both said that we would because after all you get what you pay for and this was delicious…and cheaper than a flight to the New York for a burger! *sob 🙁