After the week from hell, well that’s a bit extreme but at times it felt that way with Zanna being so poorly, I collected Olivia from nursery on Monday and there was a brown letter in her drawer where they put her belongings, artwork etc. I thought this looked interesting and when I got home and opened it there was information on a health visitor check up but this takes place in the form of a questionnaire and an observation appointment within the nursery environment. Chris was infuriated as the questionnaire was entitled “48 month review”. One of his biggest pet peeves as a parent is saying your child’s age in months. He is absolutely hilarious with his rants about it.  “Just say 4 years old!!” :):)

After we got the girls to bed I sat down to fill it in. There was just basic information on Olivia and then a series of questions to which you had to tick one of four options ~ ‘Often or Always’ ‘sometimes’ Rarely or never’ and the last being ‘Concerned’ which you selected if you wanted to talk further about the issue. Some of the questions were as follows:

We ticked through them quite quickly only assessing a few that we had to think about and then came to the last page and the last question.

“What do you enjoy most about your child?”

Chris and I looked at each other for a second and he burst out laughing saying how funny Olivia was but I had to think. I don’t necessarily mean I was stuck about what I liked about my daughter buts it’s a question I have never really thought about before as nobody has ever posed it to me.   The way the question is worded threw me, it’s as if they were asking me for a product review of my daughter on Amazon, how many stars would I give her?!

After a few seconds it dawned on me that I could literally write an essay on this perhaps  a book. Even after a weekend where she cried, moaned, broke every rule going, tipped her lunch onto the floor, wiped her snotty nose over every cushion in the house this weekend was still only a snapshot of  bad behaviour and on the whole she is so very good.

So I began to fill in the five lines they had given me to answer this. I wrote that she was funny in a humourous and witty way. She has a real sense of adventure and loves the great outdoors. She loves to visit new places and experience new things with a great thirst for knowledge. That she is kind, caring and compassionate along with polite and well-mannered. What we are proud of and most enjoy is how well she has accepted her role as a big sister. Olivia welcomed Zanna into our family and it has completed us.  She takes the role very seriously and the interaction between them both is amazing to watch.

The things we enjoy about Olivia are the things that make her well…her 🙂 All the other things like the bad behaviour at times, moaning, whining etc are what all kids do. I mean at the end of the day she’s only three and a half and going through a lot of change with nursery and all that goes with it, new clubs she has started to attend, new friendships she is developing and the ever-changing world around us. All in all she’s not doing to badly and we got an absolutely glowing report from our nursery settling in meeting on Tuesday that confirmed all that we know and love about her and her character. So I would give her a 5/5 star rating…well until the next tantrum perhaps 🙂

You just keep being you Olivia. 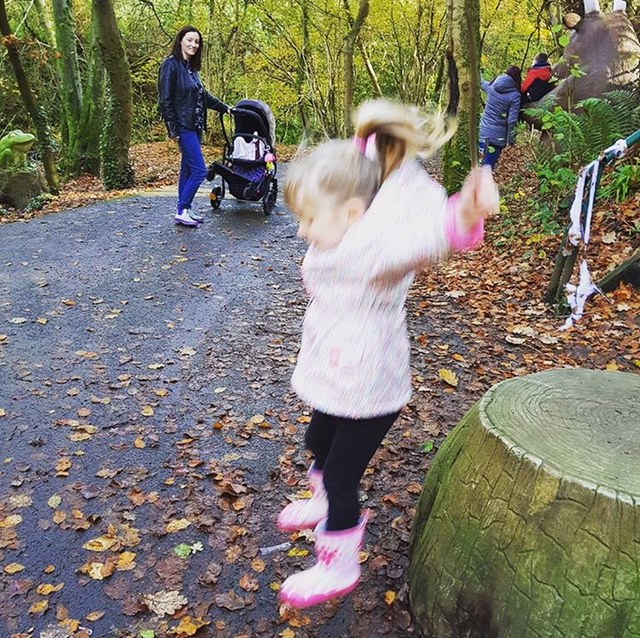