I’ve been lacking on the blog front the last few weeks so I can only apologise, I need to get back into the swing of it I know but in the meantime here is a little round-up of what we have been up to around the house 🙂

Sometimes it can be a long old Sunday especially if the weather is rubbish outside and nowhere really opens until 1pm so we decided to do some baking with Olivia. I could write how involved she got and how much she loved it but that would be a lie haha! She had much more fun just doing sprints up and down the kitchen and dragging everything out of the cupboards while Mummy and Daddy finished off the oat biscuits and tidied up. she was interested in the start so at least we got one photo 🙂

My Sister in Law came home for a few days during half term so Olivia was spoilt with copious amounts of love and affection from her favourite Auntie and lots of fun was had whilst babysitting duties were undertaken. Stephanie brought home a pair of boots for Olivia which she insists on wearing around the house at all times instead of her slippers – even with her PJs bless her. She is a fashionista in the making..

Olivia really didn’t watch TV when I was off on maternity only when I needed to get some chores done at the speed of lighting however BabyTV became a bit of a hit and in particular Hunger Henry – if you don’t know what that is ill give you a brief summary – a mexican cat named henry goes to the same restaurant everyday owned by George the chef. Whatever he wants on the menu isn’t available so he goes in search of it, brings it back to George and he cooks it for him. I know you are now dying to sky+ it immediately as it sounds so exciting but trust me its the most repetitive cartoon EVER!! We have finally got her to move on and the new addiction is Masha and the Bear. luckily for us it is actually quite funny and based on a small russian girl who is BFFs with a Bear…the clue is in the title I suppose 🙂 That is a hit along with Maya the Bee, who has a feature film out. We can only hope one day Olivia can sit for 89 mins in the one spot to watch….bliss!! 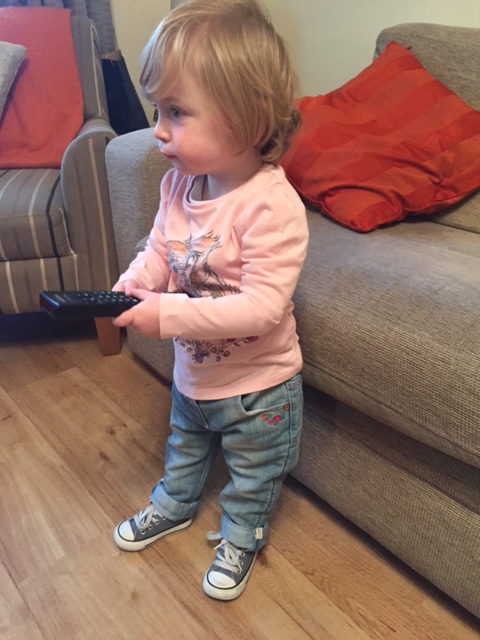 We have ordered Olivia a couple of things from amazon which arrived this week. The note said “In the coal bunker” and Chris lifted the lid of the bunker we could hear the toy making the distinguishing noise that we both fear..ohhhh the music….is there a volume control??!! Once we opened the box and put the toy away we gave Olivia the box to play with. This has been like giving her 1 million pounds. We are guessing that maybe she will have more fun with the box than the present…as parents why do we even bother 🙂

Just a bit of a weekly round-up before we get launched into December and hectic Christmas rush…ho ho ‘hold on a minute Jillian why did you buy that before Christmas now what will I get you!’